I’ve been thinking for a while that the app store – both Mac and iOS – might be the perfect way to make money creating open source apps. For the average user, they don’t care about the code. They don’t know what open source is, and couldn’t care if it’s written in Cocoa or Flash or Java1. They buy an app that solves a problem, and that’s it. Other developers can dig a little deeper, and look at the source, either to learn from, or customize the app for their own purposes.

It looks like LiveReload is currently proving this model can be successful. It’s available for $9.99 in the Mac App Store, and also open source. Over the weekend, it was the #1 paid app in developer tools, and currently #3. 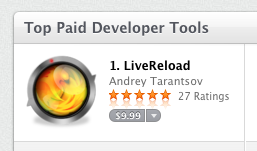 So, why open source it?

Why? Because curiosity is the most basic and important quality of good developers. I believe that everyone benefits from being able to study and tinker with other people’s software.

There is no formal license attached. You are free to tinker with it and share the results with your friends, but please don’t distribute binaries publicly without my permission. I still expect every user to pay for a license, unless you have a good reason not to.

Sounds like a good enough reason to me. I would love to be able to see the source of all the apps I use. I’m sure there is a lot I could learn, and maybe there is one little thing I need the app to do, and with the source, I can make that change. Plus, purchasing the app from the store gives me a way to easily and directly support the developer.

The only downside is licensing. It seems like there a lot of potential issues there. What if I fork the app, make some UI changes, and release under a new name, though it’s essentially LiveReload? What if I add a big feature, create a pull request, and the change gets merged into the app? Am I then entitled to some portion of the revenue?

I’m not a lawyer, so I honestly don’t know the answer. But after seeing Clear get completely ripped off before even being released. I can only imagine how many Clear clones would be out there if it was open source. Regardless, I’d like to see more of this.

1 Assuming the app actually works well, which is a big assumption.