The Xcode 6.3 beta brings the fantastic Swift 1.2 with some language improvements, incremental compilation, and a bunch of bug fixes actually makes Swift usable. Unsurprisingly though, the release has a few bugs.

iOS 8.2 is the latest release of iOS, but for some reason Xcode 6.3 beta (as of beta 3) only supports building to iOS 8.1 and iOS 8.3 devices. If you have Xcode 6.2 installed though, I found a workaround. Just quit Xcode, then symlink the 8.2 device support folder from Xcode 6.2 into Xcode 6.3 beta like so:

After that’s linked, re-open Xcode, connect your iOS 8.2 device, and Xcode should be able to read the symbols and build to it. Hopefully a future beta will fix this, but if not, this will need to be re-done after installing each beta.

Next up, your device may show as “Ineligible Device” in the build menu and you’ll be unable to select it. This was happening to me before the iOS 8.2 upgrade with 6.3 beta 2, and is still happening in beta 3. I’ve seen other reports that happens with some devices, but not others, and that a reboot fixes it temporarily in some cases: 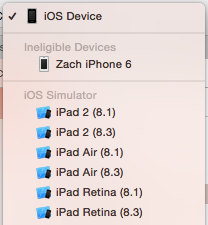 Luckily, the fix is even simpler. Go to Product > Destination, and even though it says your device is ineligible, it will still allow you to select it, then building to it will work: 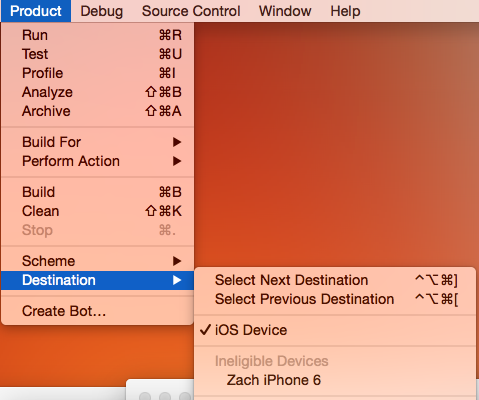